Mobile-TV in Finland : The lack of a killer application 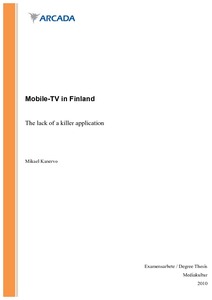 The purpose of this thesis is to investigate the development of, or lack there off, Mobile-TV in Finland. It is quite strange that such a technically advanced country as Finland has yet to see the dawn of Mobile-TV even though we were among the first to try it out. As early as 1996 with streaming TV to our mobile phones and not much later by being one of the first countries outside of Asia to launch a separate Mobile-TV network, using the DVB-H standard, in 2006.

Methods for working and trying to find answers to this were to read into the history of Mobile-TV and interviewing people from the companies working in this market. Best described
as an empiric way of working. Also a comparison was made between different technologies used for delivery of video content to the mobile user.

It really seems that we have been and still are missing the real killer application, or usage purpose for Mobile-TV to launch in Finland. This is a result of the fact that for such a long time there was no guidelines for the development – a lot of different technologies were used and none have caught on with the public. However there seems to be a consensus
between operators and distributors that one major key factor in getting Mobile-TV off is to offer it to the user when they want it. Meaning on demand services, though how the content will be delivered is still an ongoing battle.