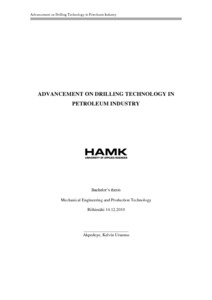 Since the birth of petroleum business, in the mid-19th century, cable tool and rotary drilling have been the only two techniques applied in the drilling phase till date. Although the rotary drilling technique has proved very successful, applying laser technology in this drilling; which is a newer technology that is already at hand, has the potential of displacing both techniques from operation.

Cable tool drilling is the first of these techniques. Hole boring is achieved by repeatedly lifting and dropping a heavy string of drilling tool into the bore hole with the bit crushing the rocks into small fragments. Comparatively, much success was not achieved with this because it is time consuming, has a very low penetration rate, blowout preventers were not easily adapted and it is almost limited to drilling consolidated formations. How-ever, at the turn of the 20th century, the rotary drilling technique was introduced and it immediately displaced the cable tool from operation. The major difference between both is that with the cable tool, drilling has to be stopped in other for cuttings to be removed from the hole, whereas with the rotary drilling, a mud circulates through the system and carries away cuttings from the whole whilst drilling continues.

Rotary technique operation is more like a common hand held drill, rotating drill bit with an applied force to drill down the earth crust. The prime mover, hoisting equipment, rotating equipment, circulating equipment and blowout preventers complement each other to give the rotary technique its status in today’s drilling. These five distinct components make a complicated looking rotary facility very understandable. Unlike the cable tool; it can drill through most rock formations, has a high penetration rate and can drill deeper wells, blowout preventers are easily adapted and can drill directionally as well.

However, applying laser technology in petroleum drilling, a fairly recent development has the potential of mitigating the limitations of the state-of-the-art technique. Experiments carried out so far on different types of lasers have shown very positive tendencies. One was conducted on MIRACL (Mid Infrared Advanced Chemical Laser) to determine its feasibility for drilling and perforating petroleum wells and another was on COIL (Chemical Oxygen-Iodine Laser) to determine the least specific energy (SE) needed to destroy varying rock types. Each of these has cleared the doubts of whether or not lasers technology can be applied in well operations.