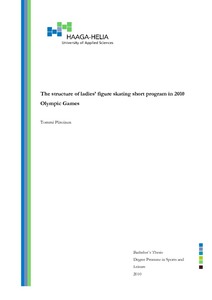 The purpose of this work was to examine senior ladies short program element structure which was skated at the Winter Olympic Games in Vancouver 2010. The study covers all 30 skaters that were qualified for the Games.
Theory part scratches the surface of demands to become a top athlete and continues with the demands of the program in rule wise and represents the new judging system of figure skating and how it has brought new demands to the sport. The research part is defining structure of ladies short program focusing on tactical side; is there any common laws among top skaters to build programs and are there any structural differences between the champion and the number 30 or are there any differences in timing/placing the elements that succeeded or didn’t were couple of ultimate questions when starting to do this study.
Skaters 1-15 had a quite the same program structure with only minor differences on elements. They mainly tried to perform the hardest jump elements on a first two elements and then have a small “breathing break” before double axel, the last two spins and step sequence which is quite physical to perform with the new judging system. Most of the mistakes happened among the hardest and most valuable jumps.
Skaters 16-30 mainly opened with easier jump and then did all the jumps in a row. They did mistakes through the program and also with spins which should be “the easy ones” from element list to perform with good quality. Also the program structure differed quite a lot compared to best 15 skaters.
The higher ranked skaters were able not just to perform with good quality harder and more valuable elements, they also planned to do totally different caliber elements than e.g. skaters ranked 20-30. On many element, skaters lost too much points considering the base value and it is reasonable to present the hypothesis to plan the program according to skill level of the skaters’ normal, everyday skill level, not according to what it might take to qualify for free skating at the certain event. By doing this, the chances to qualify for free skating increases because of higher grade of execution (GOE) values that seem to be the key factor to earn highest score from the performance in today’s figure skating.