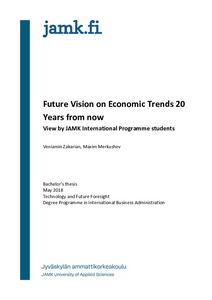 
Merkushev, Maxim
Zakarian, Veniamin
All rights reserved. This publication is copyrighted. You may download, display and print it for Your own personal use. Commercial use is prohibited.
Näytä kaikki kuvailutiedot
Julkaisun pysyvä osoite on
http://urn.fi/URN:NBN:fi:amk-2019093019396

The World is changing at a very dynamic pace, which has led scholars into establishing as-sumptive theories about what will happen in the future. The development of the economy is a topic that is of prime concern because of globalization and increased international trade. Economic trends vary from one region to another, since the factors affecting them differ. JAMK University of Applied Sciences consists of a diverse student body, which in turn allowed the researchers to hear several viewpoints regarding the topic in concern. The information exchange between the participants of this research was simple and smooth since all of them spoke fluent English.
For this research, a continuing study was conducted aiming at understanding what are JAMK students’ thoughts on the development of the economy on a global scale and in their countries on a national level and what are the considered reasons behind these views. Furthermore, similar studies were carried out concerning the same topic, which al-lowed to see how the vision of the future differs over time.
The study is conducted by two researchers, combining qualitative and quantitative analysis techniques. The theoretical framework is based on concepts of futurology and economic development. Primary data was collected through a survey which was followed by group interviews. There were 12 participants in total. Interviewees represented different coun-tries and different study programs. Several triangulation techniques were used to analyze the gathered data.
The results revealed the viewpoints of the participants on the economic development in the next 20 years and provided justifications on these claims. The outcome of this research can be used in the future by other researchers as a comparative view on future foresight.