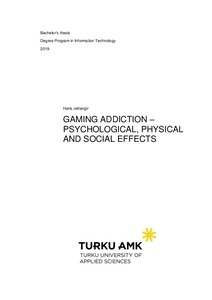 Jehangir, Haris
All rights reserved. This publication is copyrighted. You may download, display and print it for Your own personal use. Commercial use is prohibited.
Näytä kaikki kuvailutiedot
Julkaisun pysyvä osoite on
http://urn.fi/URN:NBN:fi:amk-2019103020456

In recent years, a majority of preteen, youth and a moderate percentage of adult population has been the victim of a fast-growing public health problem known as “Internet gaming disorder (IGD)”. This disease affects physical, psychological and social aspects of individuals and this often leads them to severe outcomes. As of now IGD has been acknowledged as a separate diagnosable disorder in the Diagnostic and Statistical Manual of Mental Disorders Fifth Edition. Currently there is not much data available on this issue that can help us foresee or recognize several sociodemographic, medical, and other risk factors that affect individuals that have already or are vulnerable to develop this disorder. The goal of this thesis was to raise an awareness of IGD, to uncover the aspects that help this issue spread or develop, to understand the consequences of IGD on the mental and physical health of affected individuals and discuss some treatment strategies that can be helpful for the rehabilitation purposes. The goals were achieved by conducting an online survey among the gaming communities of Turku and a few gaming communities on Facebook. The findings confirm the magnitude of effects due to IGD as feared.