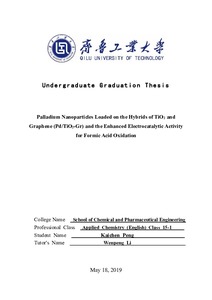 Fuel cells are widely used and play an important role in today's society and in the future. In recent years, people have paid great attention to the research work of fuel cells. The research and preparation of high performance and low cost anode catalysts have far-reaching significance for promoting the development of fuel cells, but there are still major challenges. The catalyst currently commonly used in acid fuel cell anodes is a Platinum (Pt) based catalyst. It is found that metal Pd and Pt have similar crystal structure and electronic properties. Pd has lower cost and better catalytic activity and anti-toxicity than Pt catalyst. Therefore, Pd-based catalyst becomes the preferred anode catalyst for acid fuel cell. In recent years, many efforts have been made to improve the electrocatalytic performance of palladium-based catalysts in acid fuel cells. The catalytic performance of the metal catalyst is mainly related to the structural characteristics of the catalyst, the compound composition and the carrier structure. The loading of the metal nanoparticle catalyst onto the catalyst carrier not only improves the catalytic efficiency of the catalyst, but also increases the dispersion of the metal nanoparticles by the high specific surface area and the porous structure of the carrier, thereby inhibiting the agglomeration of the nanoparticles. Therefore, our work mainly includes improving the catalyst carrier and preparing a binary palladium-based compound catalyst. This paper focuses on the anode electrocatalysts of acid fuel cells. We prepared different palladium compounds as well as different supports and different extrinsic conditions. Then screen them to find high-performance catalysts. We prepared Pd/C and Pd/TiO2-graphene catalysts, and studied the catalytic performance of formic acid oxidation. The activity and stability tests were carried out by electrochemical measurements such as cyclic voltammetry (CV), linear scanning (LSV), and so on. The main results are as follows:

1. Hybrids of Titanium dioxide and reduced graphene oxide (TiO2-rGO) were prepared by solvothermal method using graphene oxide (GO) and tetra butyl titanate as precursors. Pd was supported on the carrier by sodium borohydride reduction method to synthesize Pd/ TiO2-rGO catalyst. We prepared a total of four different ratios of Pd/TiO2-rGO catalysts (precursor mass ratio TBT: GO = 0.5, 1.0, 2.0, 4.0), and then studied its electrocatalytic activity under acidic conditions, and then selected the catalyst. The highest activity ratio showed that TiO2-rGO is a good carrier. In our newly prepared catalyst, the TBT and GO mass ratio of 1 is the most active and the electrocatalytic activity is the best.

2. Illumination was applied to the electrode to study the photo-assisted formic acid oxidation at the Pd/TiO2-rGO catalyst. The results show that the photo-assisted effects depend on the proportions of Pd/TiO2-rGO catalysts. The activity of formic acid oxidation (FAO) at the catalyst that TBT : GO = 0.5:1 (mass ratio) was decreased after illumination. So was the catalyst that TBT : GO = 1:1 (mass ratio). The catalysts with mass ratio TBT : GO = 2.:1 (or 4:1) exhibit enhanced activity after illumination.