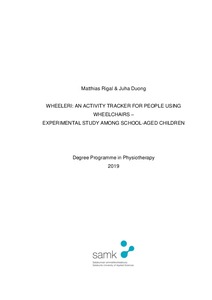 
Rigal, Matthias
Duong, Juha
All rights reserved. This publication is copyrighted. You may download, display and print it for Your own personal use. Commercial use is prohibited.
Näytä kaikki kuvailutiedot
Julkaisun pysyvä osoite on
http://urn.fi/URN:NBN:fi:amk-2019110420592

In Finland, studies have shown the persistent issue of students not meeting physical activity recommendations. National programs to promote physical activity for school-aged children have been implemented. In these programs there is, so far, little focus on children using wheelchairs. The aim of this thesis was to measure the average daily movement distance and time of school-aged children using wheelchairs during school days, to study the effect of an activity tracking device and mobile application on their movement levels, and to collect their user experiences of these devices. The study project was done at Valteri school Ruskis, Finland, in collaboration with Satakunta University of Applied Sciences’ research group Accessibility and Siru Innovations Oy.

The methods of this thesis combined quantitative and qualitative data with a focus on school-aged children using wheelchairs. The study used a modified A-B design of an N=1 trial with multiple baselines, where nine students using manual wheelchairs were recruited. The novel wheelchair-mounted activity tracker Wheeleri and its mobile application were used to collect quantitative data of daily wheelchair movement distance and time. In the baseline phase, the daily movement was recorded without participants having insight into their movement data. During intervention, participants were provided with the Wheeleri mobile application to track their own activities. For further insight into usability and feasibility of Wheeleri, qualitative data was collected using a questionnaire at the end of intervention. From the recorded quantitative data, the average values per school day were calculated. Statistical analysis and calculation of p-values was done with the Microsoft Excel-plugin Tixel. Qualitative answers were analysed using a thematic coding system. As a result, the average wheelchair movement data on school days during baseline was 674.5 meters and 115.3 minutes. During intervention, daily average wheelchair movement distance increased by 85.1 meters (n=7, SD: ±151.8, p-value: 0.094) from baseline, while movement time decreased by -2.2 minutes (n=7, SD: ±15.9 minutes, p-value: 0.361) from baseline. 78% of the participants reported that using the Wheeleri device itself increased their activity levels, while 44% felt that using the application in combination with Wheeleri increased their activity levels.