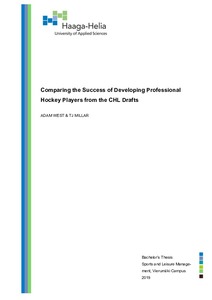 
West, Adam
Millar, TJ
All rights reserved. This publication is copyrighted. You may download, display and print it for Your own personal use. Commercial use is prohibited.
Näytä kaikki kuvailutiedot
Julkaisun pysyvä osoite on
http://urn.fi/URN:NBN:fi:amk-2019110720745

The purpose of this study is to outline the differentiation of success of drafting and developing Professional Hockey Players amongst the three Major Junior Leagues (WHL, OHL, QMJHL) in the CHL. It analyzes three development leagues that help contribute to the Major Junior Rosters; The Alberta Midget Hockey League (AMHL), The Greater Toronto Minor Midget Hockey League (GTMMHL), and The Quebec Midget AAA Hockey league (QMAAA). The three Major Junior leagues select players for their teams via a drafting process. When players hit a certain age, they become eligible to be drafted, and teams select the players they believe are the best available to come play for their team. The OHL and the QMJHL draft their players after their 15-year-old season and are eligible to play for their respective clubs in their upcoming 16-year-old season. The Western Hockey league drafts players after their 14-year-old season but players cannot play for their teams until their 16-year-old season as well. Data was collected from the development leagues (AMHL, GTMMHL, QMAAA) over a 5year period analyzing players selected in the 3 Major Junior drafts and determining if they: played in the CHL, were drafted to the NHL, played Professional Hockey, and if they played until the age of 20. Then an analysis of burnout and early sport specialization is conducted to investigate factors that could cause an effect in a player’s development. The data shows that players selected in the OHL and QMJHL Drafts are significantly more likely to play Professional Hockey opposed to players selected in the WHL Draft. The analysis of burnout and early sport specialization finds that the WHL drafting players after their 14year-old season may be placing them in age inappropriate environments that could harm their participation and development in hockey. This study concludes that the OHL and QMJHL drafting method of selecting players after their 15-year-old season plays a significant role in producing Professional Hockey Players opposed to the WHL’s drafting method of selecting players after their 14-year-old season.