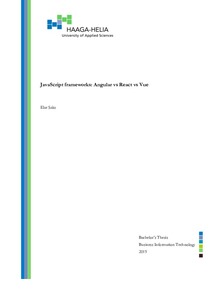 Saks, Elar
All rights reserved. This publication is copyrighted. You may download, display and print it for Your own personal use. Commercial use is prohibited.
Näytä kaikki kuvailutiedot
Julkaisun pysyvä osoite on
http://urn.fi/URN:NBN:fi:amk-2019110720797

The aim of this study was to compare the three of the most popular JavaScript frameworks in popularity, the difficulty of learning and in performance, so that the reader could make an educated decision when deciding which framework to learn or to use for the project.

To understand the popularity of the frameworks, the data by the three most used software development cooperation platforms were collected and analyzed. React was found to be the most popular out of these three frameworks.

The frameworks learning curve was compared by using its official technical documentation to learn about its syntax, architecture, data management, lifecycle, and in the ease of using third-party libraries. For the writer of this study, Vue seemed to be the easiest to learn.

To compare the framework's performance a simple single page application was built and tested in each framework. Vue proved to be the fastest performing framework.