Plan for Internal Branding Campaign 'One Team' for MacGregor 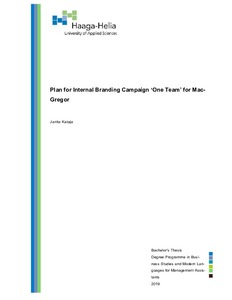 Kataja, Janita
All rights reserved. This publication is copyrighted. You may download, display and print it for Your own personal use. Commercial use is prohibited.
Näytä kaikki kuvailutiedot
Julkaisun pysyvä osoite on
http://urn.fi/URN:NBN:fi:amk-2019111221017

In July 2019, MacGregor (part of Cargotec Corporation) completed its acquisition of TTS, which meant changes for the combined ~3000 employees. The biggest worry that rose from Risk Management assessment, was the risk of MacGregor and TTS staying separate instead of building together the new MacGregor. The risk was especially with the personnel, who could have issues identifying themselves as one team.

The relevant subjects around M&A integration, internal marketing and branding, and change was first researched from literature and web articles. The main findings were that in order to establish a coherent external brand, the work must start internally; and that there are a certain pattern of reasons why employees leave, which usually comes down to the employer either not liking their employer or seeing their future in the company.

Based on the collected theory base, interviews were planned and conducted. Four people with experience in either working in a company that was acquired or managing acquisitions were interviewed. Ideas on how bringing people together, having open communication and finding creative ways to discuss about the brand and its personal meaning to the employees were collected.

Based on the research a plan for Internal Branding Campaign ‘One Team’ was created using the SOSTAC® planning system. This plan concluded in three main activities: organising local workshops, training great managers and increasing online discussion. This plan was then passed to the Director of Communications, who would implement it when the time was right.

Overall the thesis dives into how to unify personnel in potentially hostile environment, how to deal with the change the people will have to face and what is the role of internal marketing in all of this. In conclusion, the main thought that drives all the way through the thesis, is that in order to take care of your business, you have to take care of the people running it.