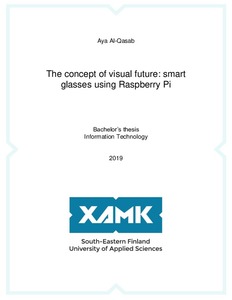 Al-Qasab, Aya
All rights reserved. This publication is copyrighted. You may download, display and print it for Your own personal use. Commercial use is prohibited.
Näytä kaikki kuvailutiedot
Julkaisun pysyvä osoite on
http://urn.fi/URN:NBN:fi:amk-2019111321157

The main goal of this thesis project to provide a more sophisticated way to replace the lost senses when people with special needs. The project aims to build smart glasses that contain specialized object detection applications based on the voice assistant system. The work is divided into two major logical parts: theoretical and practical. Each part represents different viewpoints on the process of the Internet of Things in theory and production.
The theory part of this thesis described all the technologies which were used in the process of final product creation, their basics and working principles. These included descriptions of technologies used in the project such as Raspberry Pi device and programming languages alongside other supporting tools. It also contains a description of the work projects related to several institutions with different ideas based on the same basis but with different results, most of these products rely on the system of the voice assistant to access several applications such as calendar or contact feature, telephone and maps.
The practical part consisted of a chronological description of the smart glasses development. The whole development cycle from the initial idea of the operating systems to the final state of the IoT product was described. The implementation part was focused on the creation of TensorFlow object detection applications. The applications were designed in order to provide a solution for visually impaired and deaf people with an open-source machine learning library for research and production. The main responsibilities of applications such as the discovery of a blind application object are transferred to the person who has lost this meaning through the camera image as an alternative eye, also the application translated by the languages of the deaf and mute.
The final result of this research was a smart glasses product with different integration features and implemented software. The product was delivered in the requested timeframe with all the requirements satisfied.