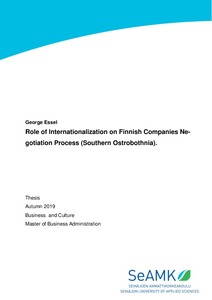 Essel, George
All rights reserved. This publication is copyrighted. You may download, display and print it for Your own personal use. Commercial use is prohibited.
Näytä kaikki kuvailutiedot
Julkaisun pysyvä osoite on
http://urn.fi/URN:NBN:fi:amk-2019112021757

Over the years, globalization has had many influences on the general operations of businesses and the business process including negotiation. Much of the studies on negotiation and internalization have been on the cross-cultural differences. In contributing to the pool of knowledge on internationalization and negotiation, this thesis explores the role that internationalization plays on business negotiation in Finland. (Southern Ostrobothnia)
The main objectives were to find out the changes and future perspective that has resulted due to international experiences and practices integrated into its business negotiations. Due to the nature of this study, qualitative methodology was used, and semi-structure interview were applied to collect data from SME´s operating both internationally and domestically. The outcome of the data analysis shows that, email is officially used as the beginning of negotiation process and it completed by face-face interaction especially in cultures were physical relationship building is imperative to the success of negotiation.
Also, different firms have different policies regarding to those who engage in International negotiation. For SME`s agent and intermediaries are used especially in case where they are not operating directly in the region. A new trend in negotiation for SME´s has been the introduction of small gift and engaging in small talks before the negotiation starts. This is seen as a way of building a strong relationship in order to promote trust which forms the basis for successful business negotiation and future transactions. Although, communication technology is enhancing negotiation and reducing physical contact like webinars and other forms of collaborative tools and channels in communicating, face-face interaction will not be entirely removed for business culture reasons and nature of the business deal.