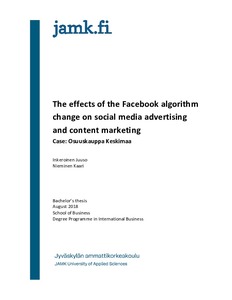 
Nieminen, Kaari
Inkeroinen, Juuso
All rights reserved. This publication is copyrighted. You may download, display and print it for Your own personal use. Commercial use is prohibited.
Näytä kaikki kuvailutiedot
Julkaisun pysyvä osoite on
http://urn.fi/URN:NBN:fi:amk-2019112021621

The social media giant Facebook has changed its news feed order, also known as
algorithm, many times. The algorithm published in 2018, prefers posts of friends over
public posts, which lowers the visibility of public Facebook pages’ posts.
Inspired by the algorithm change this study explores advertising on Facebook and the
objective was to pinpoint which kind of medium - video, picture or link - is the most
efficient way of advertising on Facebook via engagement. The goal was to find out if posts
published by public entities need money to be successful or are cost-free posts successful
enough, and also ideally, what are the key factors to advertising efficiently for free and
gain organic publicity. To analyse the results, an adapted model of Attention, Interest,
Desire and Action, abbreviated AIDA, was created and used.
During a three-week research period, a series of Facebook posts were created and
published in co-operation with Osuuskauppa Keskimaa. These posts were the foundation
of the data collection, and well comparable against one another. Furthermore, other
features, such as paid advertising and sharing a post, were tested during the research. The
results were calculated and compared from multiple perspectives, then analysed following
the framework and connected to the main points of literature reviewed.
The results were cohesive indicating that, as an advertising medium in Facebook, video is
the most efficient in creating organic reach. Paid advertisements reached the most but, in
the end, did not create more engagement. The study is tied to certain location and certain
time, which limits the usability slightly, but indications on the most efficient medium of
Facebook advertisement can be drawn from the results. The study also provides a solid
foundation for further research as to how effectively advertise on Facebook now, and in
the near future.