Creating a finance manual for American football clubs in Finland 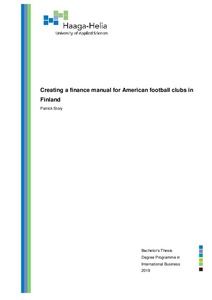 Story, Patrick
All rights reserved. This publication is copyrighted. You may download, display and print it for Your own personal use. Commercial use is prohibited.
Näytä kaikki kuvailutiedot
Julkaisun pysyvä osoite on
https://urn.fi/URN:NBN:fi:amk-2019112221885

American football arrived in Finland in the 1970s. Since then it has spread all over Finland with over 30 teams ranging from Helsinki to Rovaniemi. Currently there are men, women and youth playing the sport at several different levels. All the clubs in Finland are non-profit and benefit from the large number of volunteers. Although the clubs are non-profit the financial side must be managed properly. Sadly, many teams have seized their operations partly due to the poor organizing of their financial operations. Clubs who have managed financial success in their operations have seen growth and improvement in their organization.

The thesis consists of a theory section and empirical section that relates the theory to a non-profit sports club’s operations. This thesis also includes two Microsoft Excel created planning and tracking budgeting tools. These budgeting tools can be used to predict, track and analyze financial information to further assist in obtaining the goals and vision of each club.

The theory sections discuss what a master budget consists of and what are the limitations and taxation of non-profit clubs. The theory section also shows how to utilize the budgeting tools, how to manage club bank accounts and how to assemble a governance for the club.

The finalized product was created through several project tasks. The current level of financial operations within existing American football clubs was researched by interviewing six different clubs in Finland. The gathered knowledge gave key improvement points, which were utilized in the creation of the budgeting tools. Theory and instructions were provided on how to use the budgeting tools. Additional theory and information on the financial operations were further provided to create the final product: A finance manual for American football clubs in Finland.