Pastors as Health Promoters: A Study on Theology Students’ Knowledge and Perceptions of Health Promotion in Seven African Countries 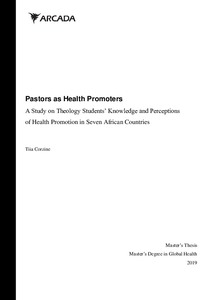 Corzine, Tiia
All rights reserved. This publication is copyrighted. You may download, display and print it for Your own personal use. Commercial use is prohibited.
Näytä kaikki kuvailutiedot
Julkaisun pysyvä osoite on
http://urn.fi/URN:NBN:fi:amk-2019112422059

The purpose of this study was to examine African Lutheran theology students’ level of knowledge of pneumonia and diarrheal diseases along with their perceptions of pastors as health promoters and support needed for this task. A quantitative survey was constructed, piloted and then administered to seven theological institutions in different countries across the African continent. A total of 100 responses were received. The data was analyzed using descriptive statistics, chi square test of independence, ANOVA and independent samples T-test to find correlations between variables. The results showed that the overall level of knowledge of pneumonia and diarrheal diseases was low. The average score on this section of the survey was 62.5% with similar individual scores regarding both diseases. The majority, 71%, felt that a pastor could function as a health promoter. The most important ways of doing that were holding health promotion meetings in churches and acting as role models. Lack of information, lack of contacts to health officials and religious values conflicting with health promotion came up as the most significant hinders to health promotion work. The respondents felt they needed more training, materials for teaching and contacts to health officials and NGOs to better promote health. More research is needed on the effects of different interventions to educate pas-tors on health promotion. The results portray a picture of positive attitudes towards health promotion, but also identify obstacles, both in knowledge and in practice, that need to be addressed.