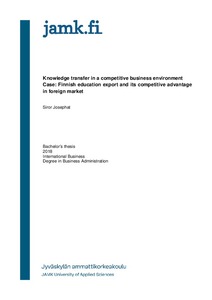 Siror, Josephat
All rights reserved. This publication is copyrighted. You may download, display and print it for Your own personal use. Commercial use is prohibited.
Näytä kaikki kuvailutiedot
Julkaisun pysyvä osoite on
http://urn.fi/URN:NBN:fi:amk-2019112522401

Knowledge has remained one of the critical assets for institutions and firms in a
growing competitive world. Such intangible assets have emerged as a significant
part for organization’s success by way of application in producing goods and
services. Whereas competition has emerged as a new phenomenon of knowledge
management, most companies have struggled to integrate capabilities of knowledge
in their processes and activities to keep up with the intensity of the competition. The
objective of this study was aimed at assessing the Finnish knowledge export
business, approaches employed and cross-compare with that of other competitors in
the same sector. This study has employed both qualitative and partly quantitative
data collection methods. Earlier studies have established that companies not
necessarily succeed only from its great competitive advantage but an integration of
models can lead to effective performance in the long run. Despite its dominance in
education rankings, results have confirmed that, the Finnish education export lack of
experience, coordination and fringe resources has hampered its knowledge export
activities globally. Ironically, evidence suggested that lack of coordinated universal
model by Finnish institutions and systematic transfer of knowledge activities has
affected efforts of penetration into the foreign market. Hence, this thesis is based on
interviews, expert debates and documented Knowledge Transfer (KT) theories.
Effective knowledge export hinges on deployment of designated resources, forging
of a common goal between institutions among other strategic approaches.