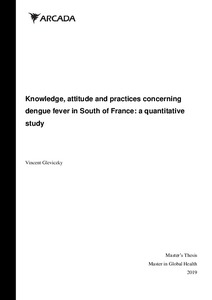 Gleviczky, Vincent
All rights reserved. This publication is copyrighted. You may download, display and print it for Your own personal use. Commercial use is prohibited.
Näytä kaikki kuvailutiedot
Julkaisun pysyvä osoite on
http://urn.fi/URN:NBN:fi:amk-2019112522184

Dengue fever is a mosquito-borne viral disease transmitted principally by Aedes aegypti and to a lesser extent by Aedes albopictus. According to the world health organization, 390 million persons are infected every year, with around 25000 deaths, mostly children. Dengue fever is mostly distributed in tropical and sub-tropical areas but in recent years has spread to Southern Europe and North America. Few dengue outbreaks have occurred in Southern Europe during the past years, where dengue virus is being transmitted by Aedes albopictus who is nowadays implanted and active. Mathematical models estimate that Southern Europe is at risk of major dengue outbreaks in the future due to climate change and globalization. As there is not yet vaccines or prophylactic drugs against dengue fever, vector management and prevention against mosquito bites are the best preventive ways.
The goal of this study was to assess the level of knowledge concerning dengue fever symptoms, transmission, prevention and management among individuals in Southern France as well as to assess the attitude concerning dengue fever.
The survey was a cross sectional quantitative study using an online questionnaire. The data was collected during April and July 2019 and 170 questionnaires were returned. The data was analyzed using SPSS 23. Non parametric analyses were done to find corre-lations between the dependent variables, knowledge and attitude, and the independent factors.
Knowledge concerning dengue fever symptoms, prevention, transmission and manage-ment was poor in South of France, with a total score of 54,2%±19,4. Level of knowledge was associated with prior information concerning dengue fever, age and travel history in dengue endemic areas. 70% of the respondents showed a good attitude as the majority was aware that dengue is a dangerous disease, that they are at risk of being contaminat-ed by dengue virus, and that it is possible to prevent dengue fever. No significant corre-lation was found between attitude and knowledge
While this study was the first one done in Southern France, the results in this study are similar with previous studies done in dengue endemic areas. Even in South of France is not a dengue endemic area, risks of dengue outbreaks in the future are existent. It is thus important to be prepared and raise knowledge and awareness among the population and dengue educational and prevention programs should be put in place.