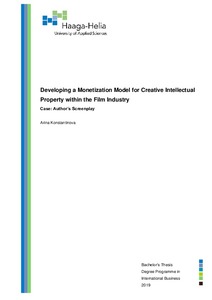 Konstantinova, Arina
All rights reserved. This publication is copyrighted. You may download, display and print it for Your own personal use. Commercial use is prohibited.
Näytä kaikki kuvailutiedot
Julkaisun pysyvä osoite on
http://urn.fi/URN:NBN:fi:amk-2019120223997

The film industry sustainably shows dynamic growth and profitability. Production companies and studios are becoming more and more difficult for screenwriters with little experience to approach. For this purpose, a monetization model developed for an independent screenwriter might efficiently simplify the search for a suitable path to potential customers.

This project-oriented thesis aims to develop and test a monetization business model for a screenwriter illustrated with the author’s screenplay sale case.

A knowledge base consisting of concepts related to business models, revenue models, pricing and screenplay selling was designed for Project Task 1 by using the desktop research. The theory was complemented with findings on current approaches to selling screenplays explored through conducting qualitative interviews during Project Task 2.

A monetization model, combining the outcomes of the first and second project tasks – theoretical framework and research findings, was developed and visualized for Project Task 3. Then, model testing on the author’s screenplay is implemented for Project Task 4 and in order to prepare and present improvement suggestions, the testing process and results were recorded and carefully analyzed.

Finally, the fifth project task evaluated project results by comparing the outcomes with the project objective.

The final outcome, a monetization model, is visualized in the format of a process diagram and illustrates the selling process described by the research respondents with the key components of an average business model embedded.

During the thesis writing process, different business concepts were explored along the specifics of selling a screenplay within the film industry. Insights provided by the interview respondents brought up valuable knowledge used for creating the comprehensive model. The testing of the model developed showed its workability and validity. Even though few improvements were suggested, overall, the model is ready to be utilized by aspiring screen-writers or authors who have little experience within the film industry.