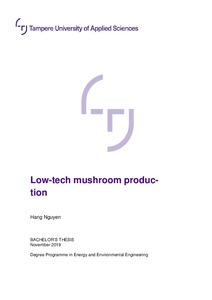 The thesis work was commissioned by Helsieni Oy, which is a mushroom production company in Helsinki, Finland. The thesis answered two research questions: how mushrooms were cultivated industrially and whether exotic mushrooms could be produced in Finland.

While one of the two purposes of this study involved acknowledgement of the procedure of low-tech mushroom production in small-farm scale, the other purpose was to acquire the success rate of growing exotic mushrooms from Asia under Finnish climatic conditions.

It was found that there were six main phases in mushroom production process, which were: substrate preparation, pasteurization/sterilization, inoculation, incubation, fruiting and harvesting respectively. The testing illustrated that out of three types of tested mushrooms, Oyster mushrooms were the fastest and most economical mushroom type to grow, while Big Cup mushrooms were quite the opposite.

The findings indicate that even in small-scale or large-scale production, these main phases of mushroom production remained somewhat the same. In addition to that, the testing results reveal that exotic mushrooms from Asia can be produced in Finland. Considerably more time should be put in the testing to gain more findings for further analysis.