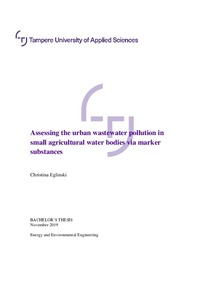 Eglinski, Christina
All rights reserved. This publication is copyrighted. You may download, display and print it for Your own personal use. Commercial use is prohibited.
Näytä kaikki kuvailutiedot
Julkaisun pysyvä osoite on
http://urn.fi/URN:NBN:fi:amk-2019112823251

Humanity is facing the challenge of increasing drinking water scarcity. One reason for the lack of clean water is its contamination with anthropogenic pollutants. In order to protect drinking water, prevent further pollution and improve global water management, the contaminants, their sources, distribution, properties and fate in nature must be determined. The German project “Small water body monitoring” (KgM) at the Helmholtz-Centre for Environmental Research examines the input of pesticides into receiving agricultural streams (catchment area<30km², agricultural land use>40%). To measure peak concentrations and thereby peak toxicity of the emitted pesticides, measurements at 69 sites with limited urban influence were conducted nationwide. In this work, the collected data of two different sampling methods (grab bottle and event sampling) were analysed for urban wastewater marker to assess the influence of municipal and industrial wastewater at the sites. In doing so, 13 marker substances were chosen to indicate urban wastewater impact. All selected wastewater indicators were present in widely varying frequency and magnitude. Analysing the samples, a significant difference in the measured concentrations depending on the sampling method was shown. After precipitation events with an increased water level of at least 5cm, the overall marker concentration rose for an averaged 0.39µg/l. With the help of reference sites and measuring points under the known influence of wastewater treatment plants (WWTP) a ratio was established to trace back potential polluting sources. Although the measured concentrations differ greatly between grab and event samples, the ratio of Caffeine(CF)/Acesulfame(ACE) resulted in a successful evaluation of both datasets. Additionally, the ratio of summed concentrations of non-persistent versus persistent indicators emphasized the results. This work shows the undeniable influence of urban wastewater in agricultural small water bodies. The concentrations of wastewater marker change significantly during precipitation and should be considered when conducting measurements and analyses. In case of the examined agricultural small water bodies, the wastewater sources can be distinguished in untreated or treated origin with the help of the ratios CF/ACE and WWTP- degradable/persistent marker substances.