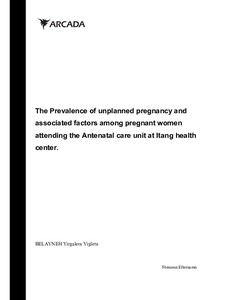 Belayneh, Yirgalem
All rights reserved. This publication is copyrighted. You may download, display and print it for Your own personal use. Commercial use is prohibited.
Näytä kaikki kuvailutiedot
Julkaisun pysyvä osoite on
http://urn.fi/URN:NBN:fi:amk-2019120324248

Background: - Unplanned pregnancy is an important public health problem in both developing and developed world, because of its
association with adverse social and health outcome for mothers’ children and family as whole.
Objective: - To determine prevalence and factor associated with unplanned pregnancy among ANC attendants of Itang health center;
Gambella region, Ethiopia, June 6, 2017.
Method: A cross- sectional study design using pre-tested structured questionnaire was employed in Itang Health Center from June6-
20. The sampling technique is convenient sampling method, which is non-probability sampling technique. SPSS software was employed
to assess the factors associated with unplanned pregnancy.
Result: A total of 183 women responded the questionnaire 68(37.2%) were unplanned and 115 (62.8%) were planned pregnancy. The
reason for failure to avoid unplanned pregnancy was lack of awareness 36(53.7%). the majority of the study subjects 166(90.7%) had
heard FP method.
Frequent reason of not practicing FP method were lack of awareness 8(39.1%). One hundred thirty-six (74.3) had no awareness of
regarding how to prevent unintended pregnancy following unprotected sex. Majority of the women 39(86.7%) who had previously
used FP method stated that emergency contraceptive was their first choice.
Conclusion: The present study revealed that over one in three (37.2%) of the pregnant women attending ANC in Itang Health center
had unplanned pregnancy experience. This showed that many factor were interwoven to affect the occurrence of the unplanned pregnancy
including lack of adequate information on modern contraceptive method, husband negative attitude towards family planning
method as well as poor counseling technique by health professional are among the main reason for unplanned pregnancy.
Recommendation: Adequate information on Family Planning methods, options and advantages should be providing and strengthened
at the health center and in the community at large.