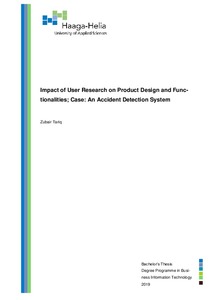 Tariq, Muhammad Zubair
All rights reserved. This publication is copyrighted. You may download, display and print it for Your own personal use. Commercial use is prohibited.
Näytä kaikki kuvailutiedot
Julkaisun pysyvä osoite on
https://urn.fi/URN:NBN:fi:amk-2019120324441

This thesis puts an emphasis on the importance of User Research and User-centered design. The main aim of this study is to find out if user research really impacts the potential application’s concept and if it does impact then what are those impacts and what is the extent of those impacts. An automatic accident detection system has been used as a case study.

This research utilizes a mixed methodology for data collection. Semi-structured interviews were conducted, and requirements were collected after the analysis of those interviews. Also, an online survey was conducted to gather data from a bigger user group.

Using the task matrix of list of features and results from the survey, a prototype of the potential application was then developed using Adobe XD and it was tested against the old interface of same application. Users were asked to use both old and new version of the application and provide their feedback on both.

Results of usability testing were then recorded and users’ comments for a specific feature in both versions of application were compared to each other for analysis of tests and draw up results.

Overall, it is seen that user research plays an important part in design and development of an application’s concept. It has been proved from the comparison of mobile application for accident detection system.