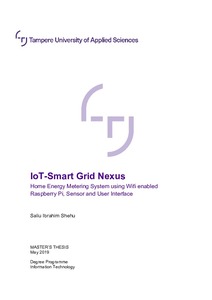 A key role of Information Technology (IT) to Sustainable Development (SD) is the promotion of energy consumption awareness that could engender changes in the behavioral pattern of people dependent on energy at far lesser cost than previously known. Protecting the Planet for People continual survival while maximizing Profit had since being a deep concern in the IT world. A solution to use energy efficiently by monitoring; to make informed decisions about the way energy is use and can be manage, formed the theme of this thesis.

This thesis, in part, uncovered the link between Smart Grid technology/meter and IoT technology/energy meter; and further illustrated proposed implementation of a simple IoT-based electricity metering, which can be displayed via an Open Energy Application Programming Interface (API), using amazingly inexpensive hardware components and open source software with none of the complexities associated with present and past similar systems. In other words, proposing an implementation methodology with an open design approach for monitoring and managing energy using IoT-based technology.

This system consists of three main components, namely: A Raspberry Pi (wifi enabled), Sensor (sensing circuitry) and a User Interface (UI). The sensor sensed the pulses as emitted from a modern electricity meter and then the signal or digital information sent to the General-Purpose Input-Output (GPIO) pins of the Raspberry Pi. The Raspberry Pi, on receiving the signal at it programmed input pin, calculates the power/energy value and then sent this data across the internet to the web/app API for easy users’ access.

Users can at this point, access the amount of energy consumed in minutes, hours, weeks or even in months via their smartphones, laptops and or tablets. This will equip and enable energy consumers to independently monitor their energy consumption and make better choices to use energy efficiently and help reduce energy wastage while saving cost.