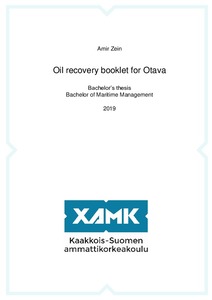 Zein, Amir
All rights reserved. This publication is copyrighted. You may download, display and print it for Your own personal use. Commercial use is prohibited.
Näytä kaikki kuvailutiedot
Julkaisun pysyvä osoite on
https://urn.fi/URN:NBN:fi:amk-2019120424638

This work is a consolidation of information from several sources, as well as through research, in the formation of a single booklet. The work was commissioned by Finferries Oy, to better prepare its vessel “Otava”, located in the city of Kotka, for its secondary role as an oil recovery vessel. The booklet is intended to assist Otava bridge upon a possible call to perform oil recovery operations.

This work was a qualitative study and development, with interviews and observation as a primary method of research. Most interviews were conducted as semi-structured interviews. The goal for this research, was to gather information to designate topics, that were satisfactory for the commissioner. The designated topics were then written out as a booklet for Otava’s bridge. Otava’s bridge personnel, played an important role in the approval of the booklet.

In conclusion of this work, new follow-up research topics were discovered. New equipment was added to Otava’s equipment cache. Problems observed through the research phase of this work, were addressed with Otava’s crew, to better improve Otava’s oil recovery preparedness. Through this work, cooperation between involved sources and Finferries was recommended, to further improve Otava’s oil recovery preparedness.

With a change in oil recovery law, starting January 2019, this work succeeded in bringing insight to Otava’s bridge, on the agencies involved in a potential oil recovery situation. This was especially so, as many responsibilities previously designated to other agencies, were now designated elsewhere. The value of this work towards its commissioner, is especially seen in the booklet itself. The booklet is useful in charting out tasks and potential issues, that Otava might encounter in an oil recovery operation, as well as provide the contact information needed to further seek out advice, if further questions develop.