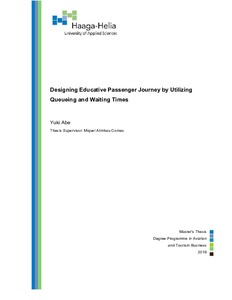 Abe, Yuki
All rights reserved. This publication is copyrighted. You may download, display and print it for Your own personal use. Commercial use is prohibited.
Näytä kaikki kuvailutiedot
Julkaisun pysyvä osoite on
https://urn.fi/URN:NBN:fi:amk-2019120725255

Airports are the locations where complicated networks of various queuing systems are tangled, and thus there are always queues irrespective to the length of waiting time. The recent research about queueing theory has been focused on reducing queueing times as much as possible by using, for example, Wi-Fi tracking to ease passenger’s stress. Yet, the research about how to utilize inevitable queuing times is lacking. In this research, therefore, the futuristic idea of bringing an educative aspect into passenger journey in order to take advantage of inevitable queueing time was introduced in the research scope, and sustainability was chosen as a topic to educate passengers to ultimately prove a possibility of improving the level of service while waiting.

The Psychology of Waiting Lines was used as the theoretical framework, which was origi-nally presented by Maister (2005) who insisted that experiences during waiting can be a key element to decide the quality of provided services. A few of the propositions of the Psychol-ogy of Waiting Lines were then also used to form the hypotheses. Through the literature reviews, some essential findings were discovered in order to design the questionnaires such as the most stressful activities during passenger journey, the characteristics of queueing at airports, the relationship between the length of waiting and satisfaction, the possible education methods while waiting and sustainability education.

Survey was implemented to generalize various passengers’ opinions as a methodology of quantitative research. 72 respondents participated at Helsinki airport railway station, which falls into the margin of error at 10% and confidence interval at 94% based on the calculated average arrival passengers at HEL for three flights (329 people). To analyse the data, correlation research was used to observe the strength of the relationships of variables.

The result demonstrated that nearly 48 respondents were interested in learning while waiting at the baggage claim, and 32 out of 48 respondents mentioned that topics to be educated matters to their willingness to learn. When sustainability was introduced as a topic, the respondents showed their positive interests in it at the correlation coefficient (r) 0.78. The respondents even showed their higher interests (r=0.85) in sustainability as a topic if it was presented in a way that passengers can learn about what they can do to improve the environmental issues when flying. The most selected education method was video, while the millennials who are going to be key players in sustainability in the upcoming future preferred to be educated by gamification.

Although this research successfully proved the potential to introduce an educative passenger journey to utilize queueing times, a few questions emerged for further research: 1. What is the certain time for passengers to be willing to learn while queueing (if there is any), 2. How would different points of passenger journey affect outcomes (including preferred education types), and 3. How can gamified education exactly contribute to queueing time learning.