Elements of the West Coast Approach to Sound Synthesis 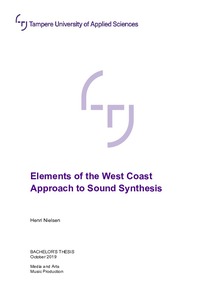 Nielsen, Henri
All rights reserved. This publication is copyrighted. You may download, display and print it for Your own personal use. Commercial use is prohibited.
Näytä kaikki kuvailutiedot
Julkaisun pysyvä osoite on
https://urn.fi/URN:NBN:fi:amk-2019120324433

The objective of this work was to study the West Coast approach to synthesis, originally developed by Don Buchla. The objective was to find out what the approach is, how it was developed, and how the individual elements of a West Coast synthesizer contribute to the creation of the sound.

The secondary objective of this work was to examine the possibilities of creating the West Coast sound on other systems than those created by Buchla.

The user interface of the synthesizer was also studied to find out how it influences the interaction between the user and the synthesizer. In addition, various software and hardware options for creating West Coast sounds were examined, and their advantages and disadvantages discussed.

It was also found that there exist viable options for emulating the sound both in the software and the hardware domains.