Development of SOx emissions with regard to MARPOL Annex VI 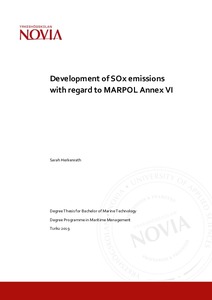 Herkenrath, Sarah
All rights reserved. This publication is copyrighted. You may download, display and print it for Your own personal use. Commercial use is prohibited.
Näytä kaikki kuvailutiedot
Julkaisun pysyvä osoite on
http://urn.fi/URN:NBN:fi:amk-2019120925454

This thesis presents the development of sulphur oxide (SOx) emissions over the years with special regard to the stringent regulations that came into force in 2015 concerning sulphur emissions from ships in the Baltic and North Sea. I want to research if they had any major effect on a European scale. In the last part, possible future predictions are addressed as well as the impact on human health and the environment.

For the thesis I used a qualitative research method by gathering information from literature, such as books and reports, as well as using official statistics from public authorities, in particular the European Environment Agency.

As a result it was found that the SOx emissions are on a decreasing trend. Although the stricter regulations don’t show a big effect on European scale in 2015, improvements in the air quality are definitely traceable on local measuring sites across the Baltic and North Sea. Effects on human health will without exception be positive whereas the impact on the environment surprisingly shows some negative consequences as well.