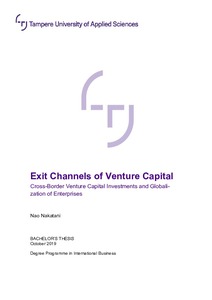 Nakatani, Nao
All rights reserved. This publication is copyrighted. You may download, display and print it for Your own personal use. Commercial use is prohibited.
Näytä kaikki kuvailutiedot
Julkaisun pysyvä osoite on
http://urn.fi/URN:NBN:fi:amk-2019120525031

The thesis was written to study the impact of the involvement of venture capitalists on young companies: especially on internationalization of young businesses, when the investments were done by venture capitalists with foreign backgrounds. This was done with primary aim of encouraging entrepreneurs to strategically select investors for their nascent business by analyzing what ‘value-added’ venture capitalists would possibly bring, other than the money they invest. Moreover, the thesis gave particular focus on the changes in exit channel of domestic investments and of cross-border investments. The outcome was essentially addressed to venture market in Finland, since the research was conducted with Finnish venture capitalists.