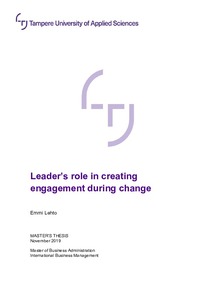 Lehto, Emmi
All rights reserved. This publication is copyrighted. You may download, display and print it for Your own personal use. Commercial use is prohibited.
Näytä kaikki kuvailutiedot
Julkaisun pysyvä osoite on
http://urn.fi/URN:NBN:fi:amk-2019120525160

The pace of change has increased globally in virtually any line of business. Therefore, organizations could derive remarkable benefits from focusing on employee engagement already during change. This research aimed at gathering information on leadership behaviours that have positive effect on employee engagement during change, and through this define which behaviours leaders should enforce. The research was conducted as a case study.

A questionnaire and semi-structured interviews were used to collect data. The questionnaire was distributed to the whole unit (27 employees and 3 leaders) and the interviews were conducted with the leaders. Employees also had a possibility to take part in the interview. Anonymity was provided in the questionnaire, because the subject was delicate and sample-size small. Analysis was conducted with the help of coding and categorizing. During the analysis, the head of the unit was re-interviewed in order to get a more comprehensive picture of the situation in the unit, and this way avoid misinterpretations.

The results indicated that features of transformational leadership were seen as an effective way to increase employee engagement also during change. Most respondents stated that clear and honest communication was vital during change, and every respondent felt that ability to listen was very important. In-creasing feeling of control, acting trustworthily & ethically, involving others, supporting and treating people individually proved to be other crucial behaviours for leaders. Another significant finding that arose from the respondents was that they felt leaders should use the above mentioned behaviours to create feeling of appreciation. The results suggested that if leaders succeeded in this, employees would feel engaged.

Considerably more research could be done to determine how differently people interpret the behaviours presented in this thesis. It would also be interesting to do further research on leader’s role juxtaposed with other aspects affecting employee engagement that the leader has no control over.