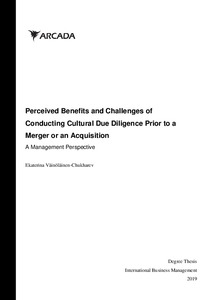 Väinöläinen-Chukharev, Ekaterina
All rights reserved. This publication is copyrighted. You may download, display and print it for Your own personal use. Commercial use is prohibited.
Näytä kaikki kuvailutiedot
Julkaisun pysyvä osoite on
http://urn.fi/URN:NBN:fi:amk-2019121526753

Recent studies have linked low success rates of M&A transactions worldwide to cultural differences between the acquiring and target companies, and the failure to address those differences. To address the problem, Cultural Due Diligence (CDD) has been proposed as a tool to uncover potential cultural issues arising between the merging organizations. The aim of the present study was to investigate how common is the use of CDD amongst Finnish companies and what is the management's perception of how cultures of companies should be addressed prior to closing an M&A transaction. For this study, an inductive approach and a qualitative method of data collection was used. To answer the research question, in-depth interviews were held with Finnish managers responsible for implementing M&A transactions at their companies. In addition, a pilot interview with an M&A professional adviser was conducted. It was discovered that there is an increased awareness of the importance of CDD amongst professionals involved in M&A transactions. However, there is yet no established model of conducting CDD amongst the Finnish companies interviewed. Given that the sample consisted of executives having been involved in the significant M&A activity in Finland, the results suggest that the formal use of CDD remains rather uncommon practice in Finland despite the increased awareness of its utility.