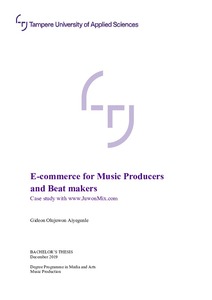 Aiyegunle, Gideon Olujuwon
All rights reserved. This publication is copyrighted. You may download, display and print it for Your own personal use. Commercial use is prohibited.
Näytä kaikki kuvailutiedot
Julkaisun pysyvä osoite on
http://urn.fi/URN:NBN:fi:amk-2019121226429

The rapid development of technology has been very impactful on the music industry. We have seen the way we consume and interact with music change over time, for example from vinyls to CDs and now to streaming. Producers and beat makers are not exempted from the effect of these ongoing changes, which in turn has opened up new ways of doing things.

The purpose of this thesis is to utilise a case study project to explore and overview the process of setting up e-commerce for music producers and beat makers. The data were gathered using theoretical studies and expert interviews were also conducted to gain more insight into how e-commerce can be effectively utilised as a tool for establishing producers and beat makers in the market place.

The findings suggest that while “Type beats” is a relatively new approach, producers can utilise this model to their advantage to establish themselves, create, collaborate and also generate income from the comfort of their homes or respective studios. Three instrumentals out of about thirty six which were made for this project are being discussed. Now, producers and beat makers do not need to go through a middle man or knock on people’s doors looking for collaborations with artists or other creators. This can be done online as there is a transition going on over the internet. This phenomenon has helped establish a large number of beat makers and producers in the new and emerging market place.