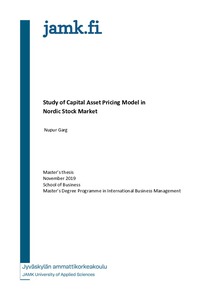 Garg, Nupur
All rights reserved. This publication is copyrighted. You may download, display and print it for Your own personal use. Commercial use is prohibited.
Näytä kaikki kuvailutiedot
Julkaisun pysyvä osoite on
https://urn.fi/URN:NBN:fi:amk-2019121326648

This study focused on studing the impacts of using CAMP in estimating the
performance of the Nordic stock market. Random sampling was used and a total of
35 companies were selected for the case study. CAPM formula, as formualted by
previous studies, was used to estimate the performance of these companies and
various anayses has done on the data including regression, t-test and Jensen alpha
tests.
From the descriptive statistics, it was found that the average beta was 0.0191 while
the maximum beta was 0.759. This implies that the selected Nordic stocks had a
systematic risk of 99% lower than the index. Further, Jensen Alpha analysis showed
that the Nordic stock has outperformed the market’s expected return based on
CAPM productions. However, looking at the t-test values, there has been a
significant change in the systematic risk in Nordic stocks and at the same time, there
has been a significant change in the unsystematic risk of this market. The regression
analysis shows that there was a positive association betwen beta and daily returns
with an increase in beta leading to a possible increase in actual return. Therefore, the
finding was not statistically significant. The expected return was also calculated.
The finding showed that beta is not the only factor to be considered when making
investments in the Nordic stock markets.
In conclusion, the study finds that CAPM is not an accurate model to be used in
measuring the expected returns of investments in the Nordic markets.