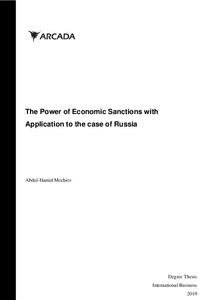 Mechiev, Abdul-Khamid
All rights reserved. This publication is copyrighted. You may download, display and print it for Your own personal use. Commercial use is prohibited.
Näytä kaikki kuvailutiedot
Julkaisun pysyvä osoite on
http://urn.fi/URN:NBN:fi:amk-2019122027800

Western countries imposed sanctions on Russia as a result of its actions in Ukraine in 2014 after taking Crimea under Russian control. The USA and the EU implemented sanctions against Russia, which included travel bans, and asset freeze for government owned biggest banks, Several officials and some members of the ruling party of Russia, some of them are owners of the biggest gas, and oil companies, and these biggest banks of Russia, accordingly went under the sanctions too. But the thesis is more concentrated on Banking industry and financial sector, during the research more attention will be paid to find out the influence of sanctions on banking system. First step will be defining the sanctions concept and understanding the reasoning behind the sanctions, and secondly will be analyzed the state of banking sector before and after the imposition of sanctions. Research questions are: How effective sanctions are, what the state of credit institutions before the sanctions was, did sanctions affect the banking industry, what is the situation of banking sector after the imposition of sanctions.