Introduction to the Special Issue on Military Sociology: Distinctions and dynamics between military and civilian spheres 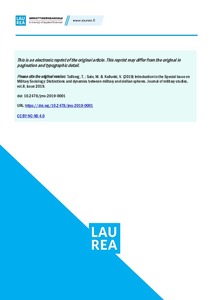 Relations between militaries and their host societies is one of the central themes in military sociology. The theme is timely because of the changes in European security policies implemented during this decade. The long process of demilitarisation after the Second World War meant gradual decline in military budgets and disappearance of several conscript armies in Europe. Coincidental growth of welfare regimes, civilian state and the deepening internationalisation weakened the role of the military as a legitimiser of the state. Due to societal and institutional changes of previous decades, a qualitatively new kind of securitisation or even militarisation of societies has led to a historically divergent process between countries. Tasks, organisation and the level of participation in international alliances and operations vary between national militaries. While in some countries armed forces are clearly professionalised with differing roles for the reserves, others maintain and develop mass conscription and military training of citizens to serve primarily national defence, but also many other purposes.