The possibility analysis of Esports becoming an Olympic Sport 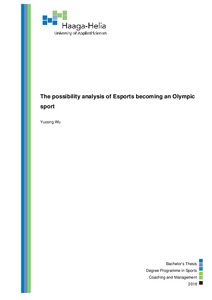 Wu, Yucong
All rights reserved. This publication is copyrighted. You may download, display and print it for Your own personal use. Commercial use is prohibited.
Näytä kaikki kuvailutiedot
Julkaisun pysyvä osoite on
http://urn.fi/URN:NBN:fi:amk-202001081089

Since Esports became a demonstration sport of the Jakarta Asian games, people have been wondering whether Esports will become an official event in the Olympics and Asian games. But as the events for the 2024 Paris Olympics and the 2022 Asian games in Hangzhou were announced, Esports is not included. The purpose of this study is to find out the factors of Esports becoming an Olympic sport and discuss the feasibility of turning Esports into an Olympic project.

This study analyzes the popularity and social recognition of Esports, the defected audience advantages of Esports and how Esports match Olympic values. According to data and literature analysis, some Esports have undesirable elements that do not accord with the Olympic values, but they also have positive elements. The high popularity of Esports among young people is in line with the IOC's desire to attract more young people to the games. However, since the penetration rate of other age groups is comparatively low, Esports is less popular than the new sports in the next two Olympic Games, and the general concept of Esports and video games are not yet clear. The short life and high commercialization are usually regarded as the main defects of Esports, while the latter actually plays a positive role in driving host countries to embrace Esports.

It is suggested that relevant organizations strengthen communication with the international Olympic committee on matters related to the entry of Esports into the Olympic Games and make plans to promote Esports into the Asian games. To improve the possibility of Esports entering into Olympics Games, relevant organization should carry out Esports popularization activities, support Esports promotion in areas without Esports foundation, and maintain good operation of game manufacturers to improve the quality of existing Esports games to ensure longevity. What’s more, game manufacturers should develop diversified Esports games and promote the Esports market by turning existing casual e-games into sports.