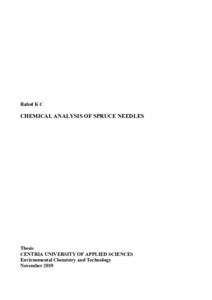 K C, Rahul
All rights reserved. This publication is copyrighted. You may download, display and print it for Your own personal use. Commercial use is prohibited.
Näytä kaikki kuvailutiedot
Julkaisun pysyvä osoite on
http://urn.fi/URN:NBN:fi:amk-202001281671

The purpose of this thesis was to analyze the distinctive chemical compounds in spruce needles. This research was mainly focused on the extractives found in spruce with the help of its needles. The raw material used in this study was spruce needles. Different characterization of compounds had been studied throughout the literature. The chemical constituents found in spruce needles were cellulose, hemicellulose, lignin and extractives. Extractives like, fatty acids, resins, sterols, stilbenes, flavonoids and many different products were identified. These complex compounds were identified by separation method.

In laboratory, the extractives were isolated by using two different solvents, polar and non-polar. Different separation methods could be utilized but mainly acetone and hexane were two solvents used in this experiment to identify the extractives with spruce needles. Extracted solution was then ready and carried out for gas chromatography mass spectroscopy (GCMS) to analyze all the possible chemicals com-pounds. During the analyzation of compounds, various complex chemical was seen in the chromatograph with different spectra. These various compounds have wide range of applications in many fields.