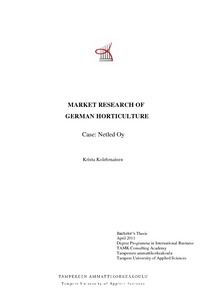 This Bachelor’s thesis was assigned by Netled Oy. The case company wanted German horticultural industry to be researched for prospect market expansion. Netled Oy has developed LED technology based inter lighting curtain, OptoGrowia®, for plant growing in greenhouses. The objective was to find out statistical information concern-ing horticulture and greenhouse market in Germany. For example, acreage of green-house cultivation was to find out.

The thesis was implemented as a market research, which was a secondary research (also called as desk research). Mainly secondary resources, such as publications of agricultural associations, were used. The secondary sources were completed with primary sources such is an interview with the personnel of Netled Oy.

The outcomes of this thesis gave an insight for Germany and the greenhouse industry in it. Statistical data on horticulture revealed that depending on geographical location in the target country, greenhouses are built and mainly vegetables and ornamental plants were cultivated in them. There was less greenhouse acreage in Germany than in the Netherlands, and Germany imported big amounts of vegetables and other foodstuff from European countries.

Horticultural associations have up-to-date Internet pages, which makes it easy to fol-low and get the recent information on the industry. Market entry to Germany would be possible, since there are quite a lot of greenhouses used for vegetable and orna-mental plant growing. For the start, Netled could take part in International Green Week exhibition organized in Germany and get regional contacts.