Support for families with teenagers with eating disorders. 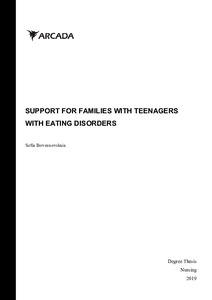 Bovsunovskaia, Sofia
All rights reserved. This publication is copyrighted. You may download, display and print it for Your own personal use. Commercial use is prohibited.
Näytä kaikki kuvailutiedot
Julkaisun pysyvä osoite on
http://urn.fi/URN:NBN:fi:amk-202002011909

In recognition of the seriousness of the eating disorder, health specialists across the world are beginning to reconsider the conventional approach to treating the disorder, particularly recognizing it as a mental health issue that affects young individuals. Although the eating disorder is caused by grossly disturbed eating behaviours, however, there is not a single, identifiable cause. As a nurse, it should be a basic requirement to have an understanding of the psychological and social risk factors that can trigger the eating disorder and the behaviours and characteristics that can be influenced (such as dieting and poor self-esteem) for early detection and proper treatment. This thesis explores the development of alternative support methods that enable nurses to deliver support in the form of educations and information for parents of teenagers suffering from eating disorders. It argued that in an era of decreasing nurse-to-patient staffing ratio, developing an alternative support system that provides services to parents with less interaction with the nurses’ yields more results than encouraging physical contacts. The thesis findings will be relevant not only to parents acting in the capacity of caregivers but also to the nurses and other medical practitioners who deliver community-based primary care to the nation's most vulnerable.