Effects of a recession on grocery sales : The financial crisis of 2007, the global recession that followed and its effects on the Finnish grocery market 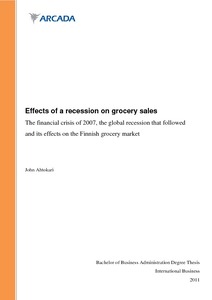 The financial crisis of 2007 began in the U.S., caused by a housing bubble and mistakes in government and corporate regulation. Due to financial globalization, the result was a global recession. Finland experienced a recession 2008 - 2009. The growth rate of GDP turned negative, unemployment increased, inflation slowed down and the trade surplus decreased. Additionally, consumer confidence in the economy of the nation declined.

This thesis examines the effects of the 2008 - 2009 recession on the sales of groceries in Finland. The thesis answers how and why sales were affected like they were. Aggregate annual sales grew, but the growth slowed down markedly, from 8.1% in 2008 to 3.1% in 2009. Sales volume decreased by 0.5% over the same period. Employment of the grocery trade sector continued to grow through the recession. Net profit-% of the trade sector decreased, from 2.4% in 2007 to 1.5% in 2009.

Research reveals several factors mitigating the effects of an economic downturn on the grocery trade. The oligopolistic nature of the market is significant. Large grocery groups have an established customer base and well-developed logistics. Private label goods are found to be an advantage to consumers, enabling them to buy roughly the same goods for less money during harder times. Compared to other retail trade sectors, grocery sales fared well during the recession, seeing only two months of negative annual growth. The implication is that larger purchases of durable goods can be postponed but groceries are essential to consumers, regardless of the state of the economy.