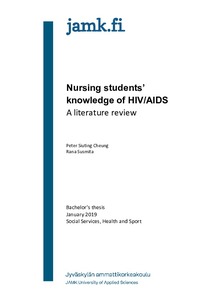 HIV is a deadly virus that could destroy humans’ white blood cells, which leads to AIDS. People who have immunodeficiency syndrome do not have enough white blood cells, and they are more prone to opportunistic infections. The HIV/AIDS epidemic has infect-ed more than 70 million people and caused about 35 million deaths since the beginning. It is still spreading in many parts of the world, especially in East Europe and East Asia. Nurses are responsible for taking care of the patients who are affected by HIV/AIDS and preventing the epidemic from infecting more people. Thus, nurses’ knowledge of HIV/AIDS is very important. Yet, little research has been done on nursing students’ knowledge of HIV/AIDS.
The aim of this research is to find out student nurses’ knowledge (understanding) of HIV/AIDS. The result can be considered in the future nursing education to improve the nursing students’ competences while taking care of patients infected by HIV/AIDS. The study was implemented as a literature review. The articles were being searched for on two databases, Cinahl and PubMed. Five articles were chosen in the end after the inclusion criteria were applied.
The result could be summarized in two main categories, the first one was the nursing students’ knowledge of HIV/AIDS, the second one was the nursing students’ discriminating behaviour towards HIV/AIDS patients in relation to their knowledge of HIV/AIDS.