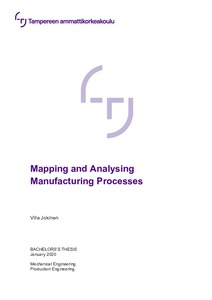 Jokinen, Ville
All rights reserved. This publication is copyrighted. You may download, display and print it for Your own personal use. Commercial use is prohibited.
Näytä kaikki kuvailutiedot
Julkaisun pysyvä osoite on
http://urn.fi/URN:NBN:fi:amk-202002072152

The mapping and analysing revealed that both manufacturing processes had strengths over each other when they were compared together. The currently used manufacturing process had an ability to produce cast faster, but the machining phase required more time. The alternative manufacturing process included more value adding activities and fewer required stages in producing the bearing bush. The SPC study did reveal that there were small differences on quality, but this had no significant impact on the overall quality. The only distinctions noticed quality wise were minor variations in the measuring results that were caused by adjustments made at the lathe during the machining.

Based on the results of the thesis, two suggestions were made for follow-up actions. If the company is willing, a new SPC study could be made for the manufacturing processes in which no adjustments would be made on the lathes during the machining phase. By doing this, actual data on how the machining parameters act during the machining would be gained. The company could also adapt Six Sigma as a part of its organization. Six Sigma would not only reduce the variation inside the bearing bushes manufacturing process, but in all the other processes the company uses.