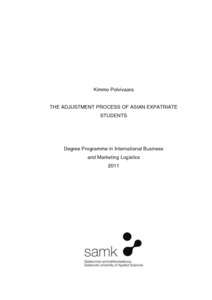 The first part of the thesis discusses cultural issues from many different perspectives. It examines differentiation of cultures, Hofstede’s four dimensions, how to cross cultures successfully, cultural differences, cultural adaptability, and culture shock. The research material was collected by nine personal interviews with pre-planned questionnaire. All of the nine respondents were at the time of research studying in Satakunta University of Applied sciences.

The interview material was analyzed with research problems in mind, and after analysis all of the research problems were more or less answered. The study was able to determine the main challenges Asian expatriate students face in Finland. Main problems were caused by the very different character of Finnish people compared to Asians. There are also some customs Finnish people have which were causing trouble among the Asian expatriates, main one being the usage of alcohol. After analyzing the answers a few recommendations were made both to the future expatriates and to the university as well.