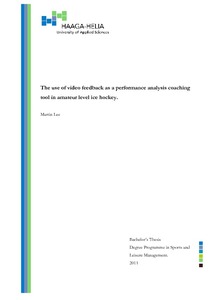 With the advancement of digital video and computer technology over the past ten years there has been a considerable increase noted in the use of video analysis as a coaching tool in ice hockey. This has been especially noted in the greater Montreal area of Canada, where coaches are often under pressure to develop emerging talented players who aspire to a pro hockey career.
The purpose of this research was to investigate how much performance analysis through video was being used and what it was being used for. The focus area was on amateur teams from midget level through to college and junior pro, such as the QMJHL.

To collect data a questionnire was used to survey the coaches and players views on using video analysis as a tool for coaching. The study was done in Montreal Quebec, Canada with coaches that ranged from midget grade, through junior to college and men’s pro.

The survey covered what video analysis is currently being used for, what both the coaches and players expected to gain from its use, its benefits and draw backs with regards to athletes playing abillity and its usefulness as a coaching tool. The findings were compared with existing research which has made use of notational analysis and latterly video analysis.

The study shows that the views towards video analysis of both coaches and players is positive, with it overall being found as useful. Coaches results showed that at the younger levels it is presented more as a player development tool to help the young athlete reach the next level. Coaches in the higher levels use video mainly as an oppostion scouting tool and a systems presentation to the team. Players at a younger age liked to use video to help with their “game sense” whereas older players in higher levels do not rely on video to help “fix” their game but more to just study the other team’s systems as well as their own.