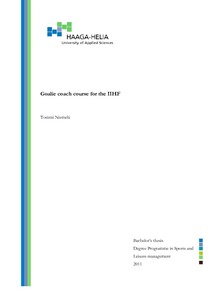 The purpose of making a goalie coach course-manual for the International Ice Hockey Federation was to provide them some written material to pass on to their national associations that they could use for educational purpose. The main idea in the manual was to provide ba-sics of the goalkeeper’s game and everyday work for beginning goalie coaches.
The starting point was to stress out the major questions that are concerning goalie coaching. One key factor was also to show the differences in development between different age groups.
The manual gives advice and guidelines for everyday work with goalies from different age groups. It also points out the most crucial factors according technical, tactical, mental and physical development of an ice hockey goalie.
The manual consists of 5 chapters. These include the teaching process of learning new skills, mental coaching of an athlete, sport specific skills of an ice hockey goalie, the demands of game situations for an ice hockey goalie and the everyday actions with a goalie in the team environment. Every chapter is divided into subcategories.
The project started in April 2010 and was finished in February 2011.
The manual is an effective tool in the future for the International Ice Hockey Federation and their National Associations to educate goalie coaches.