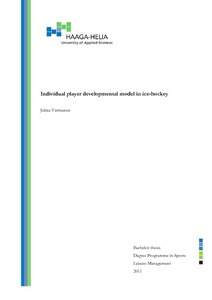 In the past few years, there has been plenty of discussion about individual player development in Finnish hockey hockey-scene. Rarely you hear the actual models to practically implement the individual player development to the “team-first coaching – win now” mode that is usually been the way to coach in Finland, even on the junior level.
During this action research there was a model established to enhance the individual player development in ice-hockey. It was done through one ice-hockey season and it is structured around goal-setting and self-evaluation, as both of the aforementioned fea-tures supported the objectives of the research: To develop a model to develop individual player, to increase communication in the player-coach relationship, to increase the players´ self-awareness and playing identity and to clarify the direction of the players´ functions.
This model proved to be effective in all the objectives that were had for the research. The player felt that he was better player after the project, player-coach communication expanded significantly, the players self-awareness and playing identity were clearer to the player than before and with the goal-setting there was direction to the players functions.
The project full-filled the characteristics of an action research, as there was instant and practical benefit for the participants and there was constant observation and development of the model that was being developed. It was an interesting journey through one ice-hockey season with an individual player that opened new perceptions to player development but also to the team-coaching.