Nord Stream : Economical and geopolitical aspects of the project 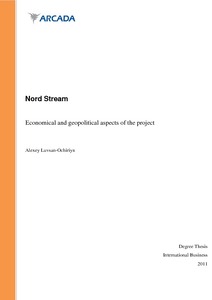 Nord Stream is a Russo-European engineering project to lay a gas pipeline on the Baltic seabed. Two parallel pipes are to deliver natural gas from Russian to Germany for further distribution in Central and Western Europe. Among other aspects the economical and geopolitical aspects have raised a lot of discussion. The official statement given by Gazprom is the the projects purpose is to create an extra link to the Russian gas fields is to fill the future gap between the European demand and supply for natural gas. Various parties claimed that this project has no economical value and it is rather designed to bypass the traditional export routes through Ukraine and Belarus thus increasing the political influence on these countries. Others found that this project is not only profitable but also offers other advantages such as more stable supply link. Managing such large infrastructure undertaking is a challenge which has been well handled. The cost overrun in such projects is very common and it is vital to create an efficient strategic system to secure the success. Fourteen years since the beginning of the project the first pipeline is finally being laid and expected to be operational in late 2011. The budget has suffered only minor increases and most of the obstacles have been efficiently resolved. The author collected, presented and reviewed the tools available to evaluate the project’s economic value and the existing theory on risk management of large engineering projects. He also presented a discussion on the geopolitical significance of the project concluding that the project has a number of positive outcomes for Gazprom, Russian economy as well as for consumers in Central Europe, but also a number of negative effects primarily for transit countries.