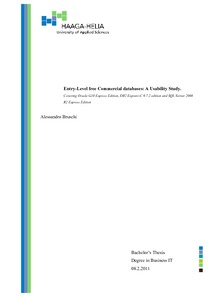 In this thesis, some theory of usability is first explained to give readers some context about the tests that took place afterwards The purpose of this thesis was to clarify some general components of usability and explain the principles of usability testing that were used in the test.

The readers, now armed with this knowledge of usability, can understand and appreciate better the test plans for the Usability Testing that took place on 16th of December 2010 at Haaga-Helia UAS.

Within this thesis project, two tests were conducted: a Cognitive Walkthrough and a Heuristic Evaluation of three commercial DBMS products and the official websites that provide help and support for these products.

The tests were quite succesful and produced copious amount of data that was used to generate some reccomendations about the products. The tests revealed that all the products had their strong and weak points.


In addition to these recommendations, there was also feedback received during the tests. This feedback will hopefully help other students and researchers to conduct similar tests in the future.