Impact of zero interest rate and digitalization on Frankfurter Sparkasse 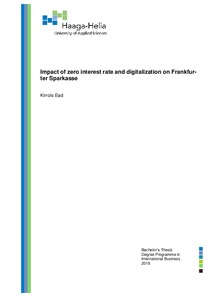 Ead, Kirrols
All rights reserved. This publication is copyrighted. You may download, display and print it for Your own personal use. Commercial use is prohibited.
Näytä kaikki kuvailutiedot
Julkaisun pysyvä osoite on
http://urn.fi/URN:NBN:fi:amk-202003042979

Zero interest rate and digitalization are nowadays international terms. They have very controversial meanings in the banking industry, especially in the zone of the European Central Bank.

This thesis investigates how a very typical German banking company named Frankfurter Sparkasse deals with the challenges of zero interest rate and digitalization.

The theoretical background provides, besides an overview of the terms above, a lot of information about the German banking system and this exceptional case company, which belongs to the third pillar of it: savings banks. Branches are the centerpiece of this type of bank.

The thesis is a qualitative study of how Frankfurter Sparkasse can maintain its traditional system of a branches bank in a time of zero interest and digitalization.

The research process included collecting primary data from customers and employees of the bank via interviews and observation. The goal was to get a clear picture of how the two different groups are affected by the current situation. With secondary data, in particular, found on websites, in press releases and newspaper articles, and tertiary sources, such as annual reports and books, findings and conclusions were created as to what extend the branch system can be saved.

In connection with these results, further studies analyse the current situation of Frankfurter Sparkasse through observations from outside the bank. The observations require empirical material from the bank´s internal perspective: the opinions of a leading manager.

In this way, the conclusions of the thesis are currently relined on how Frankfurter Spar-kasse can maintain its branch system: more digital tools, new business ideas, adapting prices for services, adjusting the opening times, modernization and merger of branches.