Digital innovations for elderly people – sustainable solutions for the future 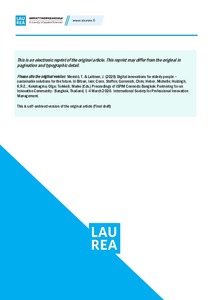 One megatrend called digitalization will change the everyday living throughout the society in a disruptive way as Christensen has described in his research work [Christensen et al. 2006]. New branches will grow up, old ones will collapse. Digitalization and artificial intelligence together will form in the future a market place, where services are available on demand basis 24/7, even globally. Those not connected to the internet access and not using the new applications, will easily drop out from the society as digital orphans [see Lahtiranta, 2014].
Ageing society is a worldwide phenomenon in post-industrialized countries in east and west as presented e.g. at Ispim Fukuoka in Japan in opening session by Takuya Nakamura and Noboru Konno. Japan is experiencing a “super-aging” society. People aged 65 and older in Japan make up a fifth of its total population, estimated to reach a third by the year 2050. The dramatic ageing of Japanese society as a result of low fertility rates and high life expectancy is expected to continue, and the population began to decline in 2011. Also in Finland, the birth rate in 2018 was the lowest in 100 years.

Changing population structure will lead to problems not only in the lack of personnel taking care of elderly people, but also in the lack of new taxpayers to guarantee the economic growth high enough to cover the growing costs of Finnish welfare society. Digitalization is a key to the effective and efficient service development.

In this paper we conclude the results of two futures workshops the first one held in March 2019 Finland and the another one held in May 2019 in China. Both session lasted half a day, including a short introduction to the theme, facilitated work in small groups and finally, sharing the results.
In the first workshop 32 participants represented different backgrounds from the elderly people´s ecosystem generally, having as a guideline the eyes of digitalization. Participants recognized taboos concerning elderly people´s digital futures and defined futures headlines about the news – good or bad - concerning elderly people´s life in the future.

In the second workshop held in China 16 health care professionals focused on elderly people´s needs and solutions to meet the needs by digital tools. They worked in small groups and created possible solutions for Chinese elderly people. As a background information for the both workshops we used results from the survey made in 2018, where 55 elderly people were interviewed in South Finland (Meristö & Laitinen 2018). As a part of the visionary concept design in China we used existing scenarios for elderly people´s independent living from the previous project run by Laurea UAS in Finland (Santonen et al. 2013).