Requirement analysis for navigation application in a hospital 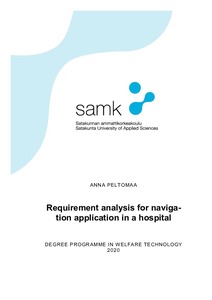 Many people, who visit healthcare facilities, experience stress and anxiety. Visitors represent vulnerable user groups and may feel powerless and perceive the environment intimidating. Visiting a healthcare facility under emotionally stressful and physically debilitating environment, customers have only little capacity to deal with complex or confusing environment.

The objective of this project was to do a requirement analysis for augmented reality navigation application prototype for hospital use. Approaches used in the making of requirement analysis were user-centered design and service design. Garrett’s elements of user experience laid the foundation in creation of the prototype. Development models such as waterfall development model, development cycle and the spiral model which fits this development work the best, were quickly introduced. Functional and nonfunctional requirements are discussed along with design requirements and customer requirements. Prototype development begun with information design where essential information was grouped to form an understandable structure for information. After information was grouped the paper prototyping was done with Figma, a user interface designing tool. Paper prototypes were shown to programmer who created the software prototype with Unity, Vuforia and QR codes combined.

The prototype had two separate test occasions and settings. Testers were interviewed with applied questions based on Nielsen’s general heuristics evaluation. First testing tested the functionalities of the software. During the testing some improvements were made adding sounds and haptic feedback. The second testing was conducted in the natural environment, the healthcare center of Rauma where five testers tested the usability of the application prototype. Testers were volunteers who were chosen from different ages between 12-70 and the background in use of technology.

Tests were successful in many ways and feedback from test users was positive encouraging further development of this application prototype.